Back to all posts

(PHILADELPHIA, PA – September 4 2019) - Three of the regions most accomplished musicians have joined forces, and together they have formed a trio that performs rock and roll, electric blues, surf, and rockabilly music. Guitarist Quentin Jones, bassist Kenny Aaronson, and drummer David Uosikkinen will perform under the name Jones, Aaronson and Uosikkinen at the Dawson Street Pub (100 Dawson St, Philadelphia, PA 19127, 215-482-5677)  on Friday, September 20th at 9:00 pm. Tickets for the event are $10 at the door.

Jones, Aaronson and Uosikkinen first performed together in 2014, backing up legendary rockabilly artist Robert Gordon in support of his 2014 release “I’m Coming Home,” which Jones co-produced and played guitar on, and Uosikkinen played drums on.  Since then the trio has worked with Johnny Neel of the Allman Brothers and Billy Burnett, who is known for his work with Fleetwood Mac and his Columbia Records solo projects.

Individually, Jones, Aaronson and Uosikkinen have literally played for a who’s who of rock and roll.

Quentin, who is endorsed by Gretsch Guitars, has lent his guitar talents to, Peter Noone and Herman’s Hermits, Billy Burnett, Charlie Gracie, Robert Gordon, Linda Gail Lewis, the Rockats, and the Reach Around Rodeo Clowns. He co-produced Charlie Gracie’s 2011 ABKCO Records release “For the Love of Charlie with Al Kooper; and has written for Lee Rocker of the Stray Cats. Quentin was a 2016 inductee into the Rockabilly Hall of Fame in Nashville Tn.

Kenny Aaronson is a world renowned bass player, who was 1988 Rolling Stone’s Bassist of the Year. He is known for his work with The Yardbirds, Bob Dylan, Brian Setzer, Mick Taylor, Hall and Oates, Dave Edmunds, Joan Jett, and Billy Idol.

David Uosikkinen is a founding member of The Hooters, and has been behind the drum kit for Cyndi Lauper, Rod Stewart, Alice Cooper, Patty Smyth, Robert Gordon, Charlie Gracie, Dar Williams, and his own band, David Uosikkinen’s In The Pocket. He also played at historical musical events, Live Aid and Roger Waters’ The Wall in Berlin.

The trio will be heading into the studio during September of 2019 to record a late fall release. The project will be available at all major streaming and download sites. 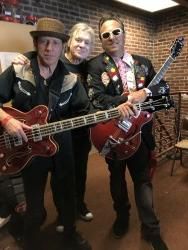